HYPE Mentoring is a nonprofit agency providing mentoring programs for middle and high school youth in Sumner County, Tennessee. The mission of the HYPE program is to Help Young People Excel in all aspects of (L.I.F.E.) by providing opportunities for Leadership, Inspiration, Fitness and Educational excellence.

We financially support mentees’ involvement in youth sports, to promote health and wellness, and to cultivate a sense of belonging, accomplishment, and self-esteem.

We provide scholarships to referred youth to join city recreational sports leagues, travel leagues, and school leagues, recognizing that registration fees, uniform fees, travel fees, and equipment are cost-prohibitive for the very students who could most benefit from involvement.

HYPE Mentoring helps close the participation gap of young women in sports, by creating and sponsoring the HYPE Fast Pitch girls’ softball team. We provide financial assistance for talented young women who otherwise could not afford to join the team.

HYPE Mentoring also serves as a repository for gently used sports equipment, and redistributes the equipment to deserving students in the county.

All recipients of HYPE scholarships and donations are required to fulfill academic and community service requirements.

Did you know? Mentored teens are… 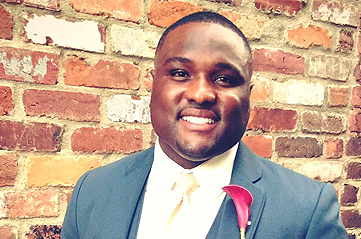 Joshua Jones, from Portland, TN, graduated from Portland High School in 2001 with an Honors Diploma, and state recognition for helping his team win the first State football title in the history of the program. After graduating from high school, he attended Cumberland University on a football scholarship, and graduated with a Bachelor’s Degree in Business Administration. He later went on to attend Bethel University, and in 2014, earned his Master’s Degree in Business Administration and Management with a 4.0 grade point average.

Josh grew up in a single parent household, where his mother did the very best she could in order to provide for him, as well as his younger brother and sister. Very early-on in his life, Josh knew that he wanted more for his future. His parents, grandparents, aunts, uncles, and other close family members, all have work(ed) extensive hours and labor in different jobs in the manufacturing industry. Seeing their hard work and long hours, he realized this type of work was not for him. He prayed that he would not be forced to live, as an adult, the same life he experienced in his youth.

Growing up, he was one of the “popular kids” who, on the surface, appeared to have a stable home life, because he always carried himself well and kept a smile on his face. However, his home life was far different from what people would have assumed. He did not let his personal trials derail him from the goals he had set for himself. He knew what was required of him in order to succeed in life. He is motivated by the hard work and misfortunes of his mother; her unfortunate trials have encouraged him to make a difference in his life, his family’s life and anyone else’s life with which he may come in contact.

Josh has used the trials and setbacks of his upbringing to motivate him and drive him to reach his dreams. Josh has always had a desire to make a difference in his community, and he believes that through H.Y.P.E., he will help provide hope for young people who are facing similar trials that he faced.

...less likely to use drugs

...less likely to be arrested for a crime

...more likely to get better grades

Our goal is to motivate young people to be the best that they can be in every aspect of life! Really. It’s why we founded HYPE.

We want to make a difference so that others can make the difference.

“It is easier to build strong children than to repair broken men. ”

More of our Fantastic Team

Jason Rogan was born in Indianapolis, Indiana in January of 1981. At the tender age of one, he and his mother moved back to her home town of Portland, TN. Growing up Jason was very active and enjoyed playing various sports, but finally fell in love with basketball and Track and Field. During his years at Portland High School, Jason scored 2000 points in basketball and won the State Title for the High Jump in Track and Field.

Show more...
After completing Community College, He played two years for Jeff Lebo at the University of Tennessee at Chattanooga, where he was a two-year starter and went on to earn All-Southern Conference Tournament accolades. He also played A Division Professional Basketball at Den Helder (Holland).

When presented with the idea of H.Y.P.E, Jason felt it was the perfect opportunity to give back to his community because todays youth struggle with the pressure of  society and its views of “normalcy”. Mr. Rogan believes that the best way to reach children is to be transparent and allow them to see that, you yourself, have experienced the same situations they are currently experiencing.  Another goal Mr Rogan wants to accomplish with H.Y.P.E, is to allow the youth to see that even in adulthood, you can overcome any obstacle placed in your way.Jason is a son, brother and a proud father of a one year old girl named Zara. He is so elated to see the positive effect H.Y.P.E will have on this generation and those to come.

Would you like to volunteer? We’re looking for volunteers to help mentor, organize, or —you tell us— what can you share?